Today (Sunday 18 October) is UK Anti-Slavery Day and we’re raising awareness of modern slavery and human trafficking. Did you know that we have a dedicated Modern Slavery Team and that there’s a South Yorkshire Modern Slavery Partnership? Read on to find out more.

Modern Slavery is still happening within our communities. It is a serious and hidden crime, in which victims are viewed as a commodity to be repeatedly exploited. Victims of modern slavery are unable leave their situation as they are often controlled through several means including threats, violence, coercion and deception.

You can help us in the fight against modern slavery. By actively looking for the signs and reporting concerns to us, we can identify and safeguard vulnerable victims, and put a stop to this growing issue.

There are four main strands of modern slavery; forced labour, domestic servitude, sexual exploitation and criminal exploitation, such as cannabis farming. All of these are a clear violation of human rights.

Below are a few common signs that someone could be a victim of modern slavery or human trafficking:

- Evidence of physical abuse, including untreated injuries, branding or scarring

- Visible distress, a heightened sense of general fear, an unusual distrust of law enforcement or withdrawn

- May have been wearing the same clothes for days and appear unkempt, or wearing inappropriate clothes for the conditions

- Communication controlled by another person speaking on their behalf, or dependant on another for travel, food or money

- Be vague about the type of work they are doing, or working excessive hours but with little access to money

- Not in possession of identity documents, or vague about their location

- Children found in areas away from home, having unexplained money, items, gifts or mobile phones.

Partnership working, and the sharing of intelligence and information, is key to the success of understanding and tackling Modern Slavery. South Yorkshire’s Modern Slavery Partnership was established in 2019, and brings together statutory and non-statutory* partners from across the county.

“Our work involves building an intelligence picture around modern slavery and human trafficking across South Yorkshire. To do this accurately, we really do need your help in being our eyes and ears.

“Cases of modern slavery and human trafficking are increasing, however it is largely a hidden crime, making it very hard to recognise and detect.

“Everyone going about their daily business will inadvertently come into contact with people who are being exploited, so it’s vital that we raise awareness, share the signs and indicators, and empower people to report their concerns.

“Covid-19 has also impacted on modern slavery, due to people becoming increasingly vulnerable to exploitation, and new challenges in identifying victims following a reduction in face-to-face services. It’s more important than ever to recognise those at risk.

“If you have concerns that an individual or group of people are being exploited, please contact South Yorkshire Police on 101, or on 999 in an emergency. You can also contact the Modern Slavery Helpline on 0800 0121700, which is open 24/7.” 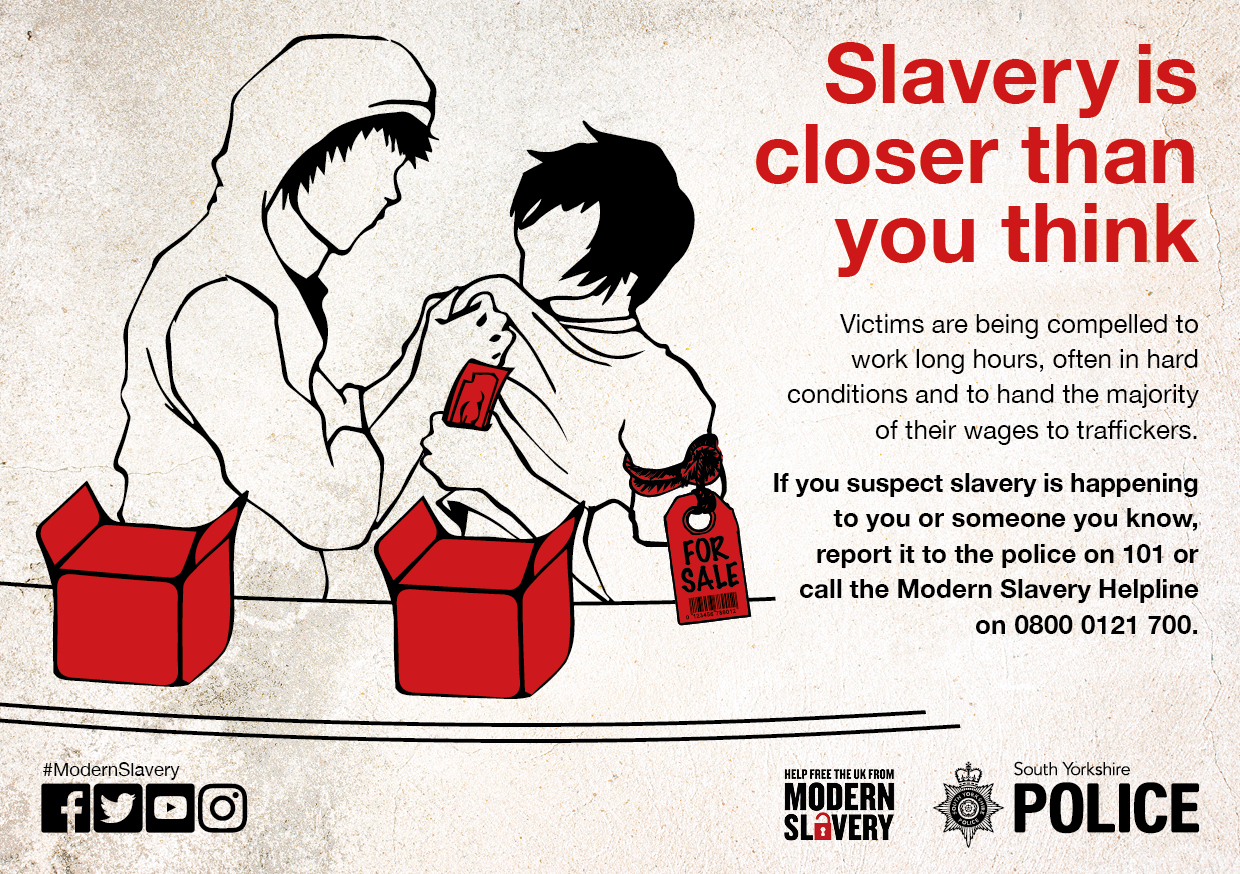 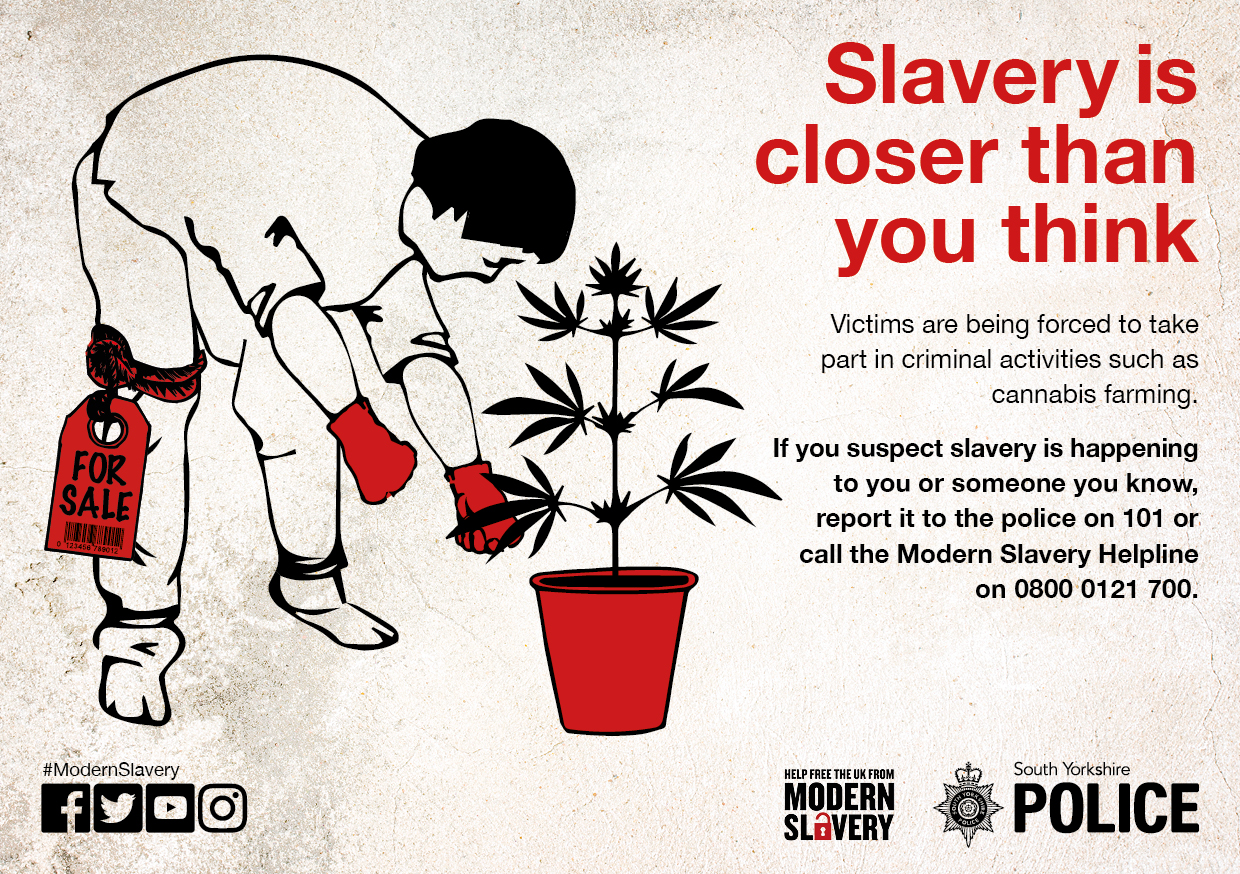 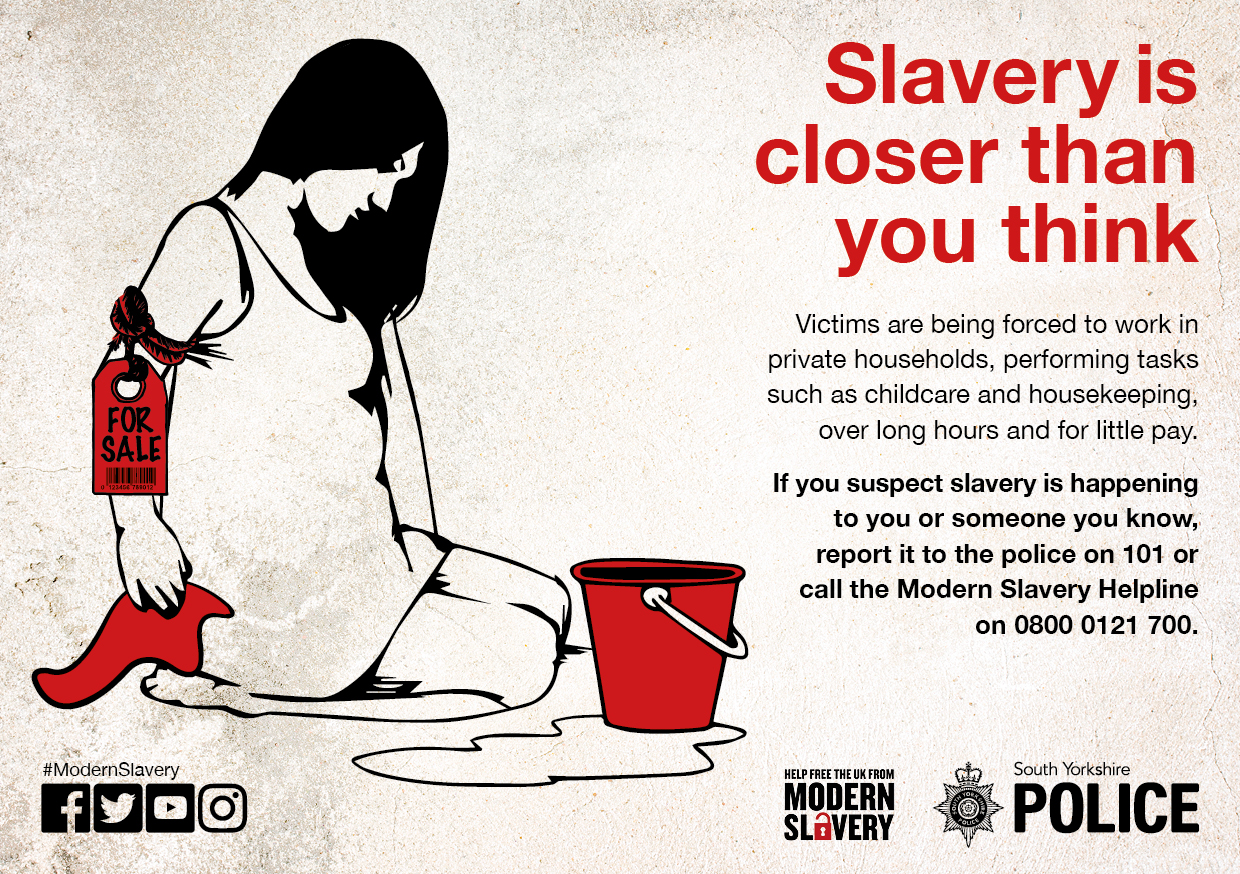