A Sheffield man has been sentenced to ten years in prison after being found guilty of carrying out a series of terrifying robberies on the city's streets.

Debesay Teklehaymanot,19, of Ellerton Road, Sheffield was sentenced at Sheffield Crown Court yesterday (31 March) for robbery, possession of an offensive weapon and assault.

In the early hours of 21 August, a man was walking along Egerton Street when he was approached by Teklehaymanot, who was in possession of an axe. Teklehaymanot threatened the victim, forcing him onto his knees, before stealing his wallet. Out of sheer terror, the victim revealed his pin number, later finding £200 had been withdrawn from his account.

The following morning (22 August) around 3am, a woman was walking alone through Sheffield City Centre when she was approached by Teklehaymanot, again holding a weapon. She reported he threatened her to her knees, took her bank card and said; “I know your face now, if you have given me the wrong pin, I will kill you.”

Teklehaymanot struck the woman with an axe twice on her head, before she managed to escape and get help.

In addition to the robberies, Teklehaymanot was also charged with possession of an offensive weapon after he was filmed on CCTV following a man home from a pub on 1 September. Thankfully officers intervened and arrested him.

Detective Constable Ryan Griffiths, investigating, said: “We work hard to take those who cause fear and harm in our communities off the streets.

“Teklehaymanot carried out a series of terrifying robberies that left his victims highly distressed. This man showed no remorse for his actions throughout the investigation, replying ‘no comment’ in all his police interviews.

“He has now been given a significant sentence behind bars and will have to serve at least two thirds of his sentence before being considered for release.

“I hope that the public are pleased to see this man get a lengthy sentence, which means he cannot commit further crimes on our streets.”

Teklehaymanot pleaded guilty to charges on 5 February 2021, he was sentenced yesterday (31 March) at Sheffield Crown Court. 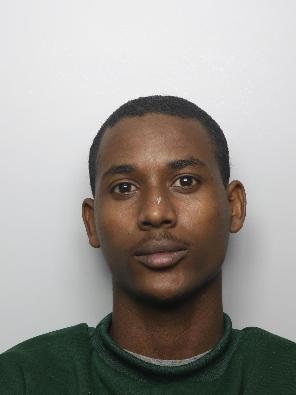