A Doncaster man has been sentenced to time behind bars after failing to stop for roads policing officers last year.

Tony Ellison, 39, of Lothian Road has appeared before Sheffield Crown Court charged with dangerous driving and driving without a licence and insurance.

On 4 April 2020, roads policing officers were patrolling in Doncaster when a silver Ford Transit van caught their eye on Leger Way. Officers requested the driver to stop the vehicle. The driver, later identified as Ellison failed to do so and a pursuit commenced.

During the pursuit, Ellison exceeded the speed limit, drove over pedestrianised areas and through red lights erratically, showing disregard for other road users, pedestrians and officers.

Officer in charge PC Will Lane explains more, he said: “While carrying out routine checks and stops, we often find that those who are willing to drive without the correct insurance and documents are more likely to take risks or be involved in crime; Ellison is a prime example of this.

“It was 4.30pm when we asked Ellison to stop and speak to us. During the pursuit he put himself, officers, drivers and other road users at risk.

“At one point, he drove over a large grass verge, up onto the pavement and through bollards to try and evade officers. He reached speeds in excess of fifty miles per hour in a densely populated residential area, that has a speed limit of 20mph.

“The roads were full of parked cars, but Ellison didn’t care what damage he caused.”

Officers brought the pursuit to an end by using their vehicles to stop Ellison from driving any further; tactical containment.

PC Lane explains how even after stopping the van Ellison didn’t want to give up and ran away, he continues: “One we had brought Ellison’s van to a stop, he jumped through to the passenger side window and attempted to run from the scene.

“Immediately followed by my colleague, he attempted to jump a garden fence but was quickly arrested.”

From the pursuit, damage was caused to two police vehicles, two parked vehicles belonging to members of the public, and to Ellison’s van. The arresting officer also suffered minor injuries to his hand.

PC Lane added: “These types of incidents show the importance of carrying out routine checks and stops; a dangerous driver, who has no respect for the safety of others, is now off our roads.”

Ellison was sentenced last week (21 January) to 18 months in prison. He has also been banned from driving for 12 months upon his release. 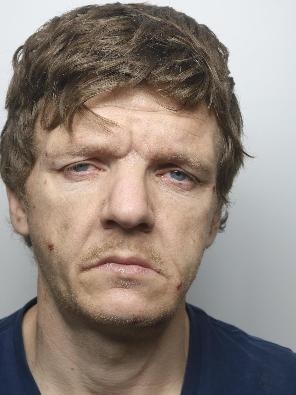