A Sheffield man has today (Wednesday 7 July) been jailed for life with a minimum of 15 years after being found guilty of murdering his brother during an alcohol-fuelled argument last November.

Thamraze Khan, 31, formerly of Club Garden Road, has been on trial at Sheffield Crown Court for two weeks, accused of murdering his 28-year-old brother Kamran Khan on 15 November 2020.

The court heard the brothers had attended a house party at Lowedges Road, Sheffield, the night before the murder, arriving by taxi at around 8pm.

Detective Chief Inspector Jude Ashmore, senior investigating officer, said: “They left shortly after midnight and returned to the defendant’s address at Club Garden Road by taxi, the driver said it was clear the pair had been drinking.

“At 12.57am CCTV footage shows the brothers arriving home. At 1.05am, Kamran Khan can be seen emerging from the address and taking a few steps before slumping to the ground. Within this time frame he had sustained fatal injuries.”

The court heard that a neighbour found Kamran lying outside of the flat in a pool of blood at around 2am and called the emergency services.

When police arrived at the scene, they found Kamran with serious injuries and despite the best efforts of officers and paramedics, he was pronounced dead soon after.

A post-mortem examination revealed he died a result of a stab wound to the chest.

DCI Ashmore continued: “Officers quickly entered Thamraze Khan’s flat by force where they found blood stains throughout the property. The police then found him wearing a latex glove on his right hand, which appeared to have blood inside it.

“Thamraze Khan was arrested on suspicion of murder and taken into custody. As he was being lead out of the flat, he was captured on body worn video footage asking officers, ‘has my younger brother been stabbed?’ He then added that he had had an argument with his brother earlier, but said he didn’t know where he had gone.”

Throughout police interviews Khan repeatedly asked officers if they were ‘sure’ that Kamran was dead, and maintained he had nothing to do with it. He gave ‘no comment’ answers to the majority of questions put to him.

DCI Ashmore added: “I would like to offer my condolences to Kamran’s family and friends as these proceedings will undoubtedly have been both difficult and distressing for them.

“To lose a loved-one is always heart-breaking, but the circumstances of this case make it particularly upsetting for those affected, and my thoughts are with them all.

“Our initial enquiries at the scene of the murder immediately led to the identification of Thamraze Khan as a key person of interest to our investigation.

“Officers found Thamraze with an injury to his right hand. There were signs of a disturbance, blood within the property, blood stained clothing and evidence he had tried to clean up inside the flat. A knife, thought to be the murder weapon, was also discovered.

“From the start, Thamraze made comments to officers that he was fully aware that someone had been stabbed and that it was his younger brother who was the victim.

“I am satisfied that he has been found guilty of murder today, such was the weight of evidence placed before the court by the investigative team.” 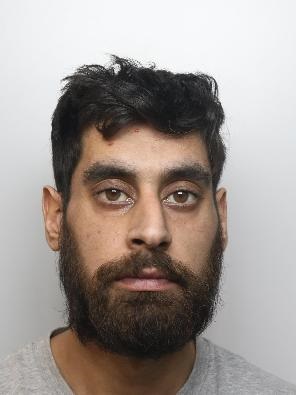