Dame Sarah Storey, Britain’s most successful Paralympian and the Active Travel Commissioner for the Sheffield City Region, joined Inspector Kevin Smith and his team for two events aimed at passing on the bike safety message.

These formed part of the force’s efforts towards Project EDWARD, a national road safety campaign which stands for Every Day Without A Road Death and sees the police joining forces with partner agencies to promote the road safety message. In this region, all efforts were put on between South Yorkshire Police and the South Yorkshire Safer Roads Partnership.

First of all, Dame Sarah joined Insp. Smith at Deepcar St John’s Primary School to give a talk to cyclists of the future who were undertaking a session as part of the national Bikeability scheme - which helps youngsters gain important cycling proficiency while having some fun in the saddle.

Accompanied by her gold medal from the Road Race event at the recent delayed Tokyo Paralympic Games, Dame Sarah talked to pupils about the need to cycle safely on busy roads, her love for her sport and also her hopes of cycling continuing to grow as a green mode of transport.

Insp Smith echoed the safety messages while he addressed the pupils, before Dame Sarah joined them in the playground for a Bikeability session.

Following that, the team headed out of Sheffield to the A57 for a safe passing operation on their bikes. Dame Sarah and Insp Smith were joined by two other officers and rode in pairs in a triangular route which started on Rivelin Valley Road and joined the A57 Manchester Road as far as the Cutthroat Bridge car park. They then returned along the A57 and turned off onto Rails Road and back onto Rivelin Valley Road.

Any drivers who posed a danger to the cyclists by passing too closely while overtaking, driving aggressively behind them or using horns to intimidate them were radioed ahead to waiting officers at two checkpoints who would then pull them over and offer advice on their driving habits in future.

In total, 25 motorists were pulled over and spoken to in the two-hour event. Five more who will be receiving a Notice of Intended Prosecution through the post as they were not stopped at the time.

In total there were 10 prosecutions for offences such as driving without due care and attention and contravening double white lines. Three motorists were also issued with warnings under the Police Reform Act which means if they are found to be using their vehicles in an antisocial or careless manner again within the next 12 months then they can be seized to reduce the danger they pose to other road users.

Speaking about taking part, Dame Sarah, who was there on behalf of Sheffield City Region’s Cycle Walk South Yorkshire Scheme, said: “I always look forward to coming into schools and working with children because there is so much positive energy. Many are unaware of the impact they can have on improving their local area and route to school, so it is always very empowering to hear them discuss how they would like to get involved.

“Inspector Smith and I spoke about how they can influence grown-ups on their vehicle journeys and I invited them on to our team to tackle road safety issues.”

And on the safe passing operation, Dame Sarah added: “Clearly, these operations are music to the ears of anyone who rides a bike, so it was great to be able to witness the police work so hard to improve road conditions for everyone. The animosity some people cycling have received from other road users is completely unnecessary and the more work that can be done to reiterate that driving a vehicle is a privilege, not a right, the better.

“As anyone who commutes by cycle will tell you, abuse from vehicle drivers is a daily issue. Sometimes it’s borderline bad driving, but all too often it is deliberate, dangerous driving and unnecessary intimidation through anti-social behaviour.

“It’s a public road, so everyone has the right to be there. Obviously I have personal reasons for being involved in a safe pass oepration, but I also know the reason why so many people are put off walking and cycling, and why our rates of everyday cycling journeys are so low - it is down to the levels of road danger.”

Insp Smith said: “It’s important to speak to children and, after they’ve been properly trained, to give them the confidence to use the roads.

“It’s also important that we can help them ourselves by making the roads safer for them to come to school any way they want.

“Sarah is a great role model to the kids and this helps connect them with her Paralympic successes, inspire them, and make them more likely to succeed and gain confidence around road use.

“This is not the first time we’ve done this and we will continue to work with schools to make sure we are giving them the road safety message. And we will continue the safe passing operations to give people the confidence we will look after them when they are using the roads to go to work, school or wherever else they wish to go.” 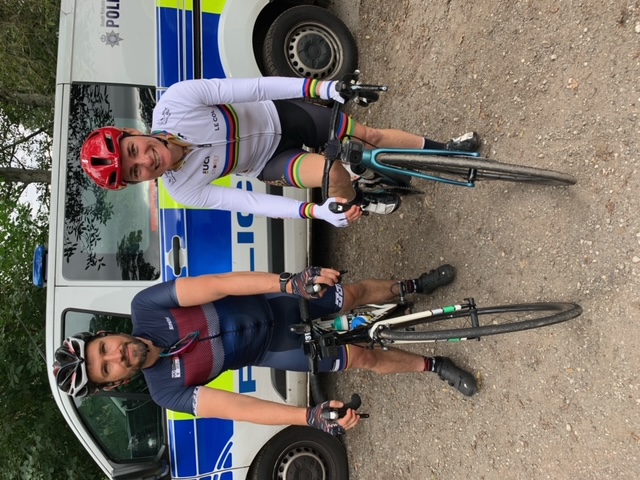