“When you put on a uniform you stop being yourself and you become an officer in South Yorkshire Police.”

Since the late 1980s he’s walked a beat, protected our road users, and trained younger generations in the art of policing. And now, Superintendent Paul McCurry is hanging up his baton for good as he moves onto the next chapter of his life, leaving the force today (Tuesday 7 September).

Rotherham-born Paul joined his home county force in July 1988 when he became a Special Constable at the age of 18. And after having to learn the ‘dos’ and ‘don’ts’ on the job in the face of the unruly he has gone on to serve South Yorkshire Police over the next three-and-a-bit decades.

He had to join the Specials due to his lean physique. At that time, you had to weigh 10-and-a-half stone to be accepted into the force, but Paul tipped the scales at a sprightly nine stone and three quarters.

“I was Special Constable 212 and I was stationed at Mexborough in Doncaster,” he recalls. “I remember putting on my uniform and thinking, ‘crikey I look so skinny’. Mexborough was one place I had spent many years in so to be a police officer in a town you knew was quite challenging.

“Often you’d find yourself reporting for duty and going out on your own. So my grounding in policing was learning on the job and there were lots of regular officers who I worked with who I still hold in the highest regard and made me the policeman I am today.

“I probably had more scrapes back then than I did when I joined the regulars because I was young, I was daft and I was naïve. But, I got stuck in and made lots of arrests, which meant I got to write reports and produce evidence, which was given in court many times. I was proud that as a volunteer I was doing that. It was a tremendous achievement.

He also learnt that policing can follow you home too, recalling a time he was getting ready for bed when he heard a noise outside. Peeking out the window, he noticed somebody trying to enter a property opposite and headed out to deal with the situation, helping to arrest a wanted burglar.

“That cleared up 25 burglaries and a significant amount of jewellery was recovered from his address,” Paul recalls.

Despite facing backlash from certain criminals who knew where he lived, Paul stuck with policing due to the “pride” felt by his family and the “structure it brought to my life, which I had been missing”.

“I’d like to think policing changed me for the better,” he adds.

He joined the regular force on 13 January 1992 – once he had successfully beefed up of course after being told to “drink lots of Guinness” - and was posted to Goldthorpe in Barnsley.

“I remember joining and it was a day shift,” Paul remembers. “The cleaner used to cook a breakfast for the whole shift on duty and that was a time you came together and felt you were part of something.

“You were part of a team – a very strong team. And I was told they would look after me and look out for me. I was proud to properly join South Yorkshire Police.

“The Inspector used to say to me the only times I could be in the station was 45 minutes for a meal, and if I was bringing somebody back I had arrested. The rest of the time I was out and about and that’s where I really learned how to be a police officer.”

Paul then moved across to Wombwell, and would spend a chunk of his career in roads policing, which “interested me immensely”.

“It was great, I really enjoyed it,” Paul says. “Not only can you deliver driver safety but you are also taking criminals off the roads.”

After one stint in the former drugs unit at Wombwell working “in often challenging environments”, and another in CID, his vision started to turn towards helping others following his footsteps into the force.

“In about 1996 my ambition changed. One of the things I really did enjoy was training. I was a Tutor Constable after just two years’ service and the Specials trainer for Barnsley, taking out young officers and showing them the ropes.

“I’d taught myself so much as a Special, I wanted to give people an introduction to policing rather than just being thrown in like I had been. So in 1996 I applied for a full-time job at our Force Training Centre. I thought training people would be exciting.”

He got an interview and landed the role. This included taking young recruits to the old training college site at Panel Ash in Harrogate or the force training site at Ecclesfield in Sheffield.

“One of my great ambitions was to go to university,” Paul adds. “I realised I probably wasn’t going to be able to study while working in CID. I also learnt to fly in 1996 and I had funded a significant part of my flying lessons out of working overtime in CID. Working long hours, though, made it difficult to study.

“Training motivated me to do that, because training people and watching them grow gave me a buzz. I went to university and got my degree in education and the experience I got helped me deliver management training, it allowed me and a colleague to write the human rights training in-force and deliver the majority of it - these were highlights for me. I did that until 2001.”

Then, a promotion to Sergeant followed and he worked at the District Training Centre in Durham, before returning to Barnsley, where he remained in various roles until 2006.

“I had a great team,” Paul adds. “One day I was chasing a criminal and I don’t know if I slipped or I was pushed but I ended up sliding across some gravel and taking all the skin off both arms.

“Somebody said to me I looked like something out of Terminator! I was treated at hospital and returned to the station where I was met at the front gate with a wheelchair and I was awarded a Purple Heart. That is what I was saying about belonging to something. The team were great like that and kept spirits up.”

In 2006 he was promoted to Inspector, where among other things he helped design the then-new station at Kendray. But quickly he moved across to Sheffield, where he remained until 2008.

Then came a switch to gang crime, where he worked as an Inspector in a role which “promised much international travel”, but in which he never went further than Glasgow. This involved setting up local processes to tackle gang crime, which followed the murder of 16-year-old Sheffield schoolboy Jonathan Matondo in 2008.

He worked a lot around violent crime, including hosting a visit alongside then-local MP David Blunkett for the then-Home Secretary Alan Johnson in 2009 to view their work. He became a peer reviewer for the Home Office and would travel with his team to see how other forces were tackling similar issues.

“I loved it and it was a great opportunity,” he continues. “It’s again all about training and education and it gave me a buzz. I think it worked and it’s nice to think I helped turn somebody’s life around. I think we helped make Sheffield no longer one of the most significant places in the country for gun and knife crime.

“It was a true partnership effort between the police, the community, the council and the NHS to make Sheffield a safer place and eradicate these sorts of offences. Lots of results you can never publish or quantify, but I know a lot of people can and will say we did significant work.”

As with any career, the highs were also interspersed with more challenging times. And for Paul, he was promoted to Superintendent in 2013 which saw him posted to Rotherham.

The Jay Report – the Independent Inquiry into Child Sexual Exploitation in Rotherham – was published in August 2014 which brought “immense pressure” trying to appease public opinion which was showcased through demonstrations.

“I was doing nothing else except policing and there was no release mechanism for me. I started to have a very difficult period.”

Despite a switch to Head of Business Change and then Chief of Staff the fallout around the force made it a constant “emotional challenge” for Paul.

“I still loved it, but I wasn’t the same person. I felt so tired in those years. In 2019 I got to a point I wasn’t sleeping and I felt really strange.”

He was diagnosed with “significantly” high blood pressure after it got to the point Paul’s wife insisted he seek medical advice, and an enforced period of sickness leave was given out to a man who had rarely missed a day off in his career.

“That was the loneliest place I had been,” he recalls. “But I received a great support from people. I got through it but it changed my outlook a bit on life.”

After a short period of time Paul moved across to be Superintendent in his “dream job” – overseeing the Operational Support Unit which encompasses roads policing, firearms, dogs, the mounted unit, and other teams.

It’s where he has served until his retirement today, and he hopes he can inspire others to follow him into the force with some advice about how to be a success.

“Always have a plan, and work to it,” Paul adds. “The plan might change, but the work can keep progressing to achieve an end. You might have to modify something but be true to yourself. Talk to people. The right conversation can put you back on track.

“Policing is immensely rewarding. But it relies on the community helping to succeed. We need to do more work together, so just ask yourself, ‘what can I do to make my community a better place’?”

Paul’s next step also keeps to his training theme as he will now be joining Salford University as a police lecturer. 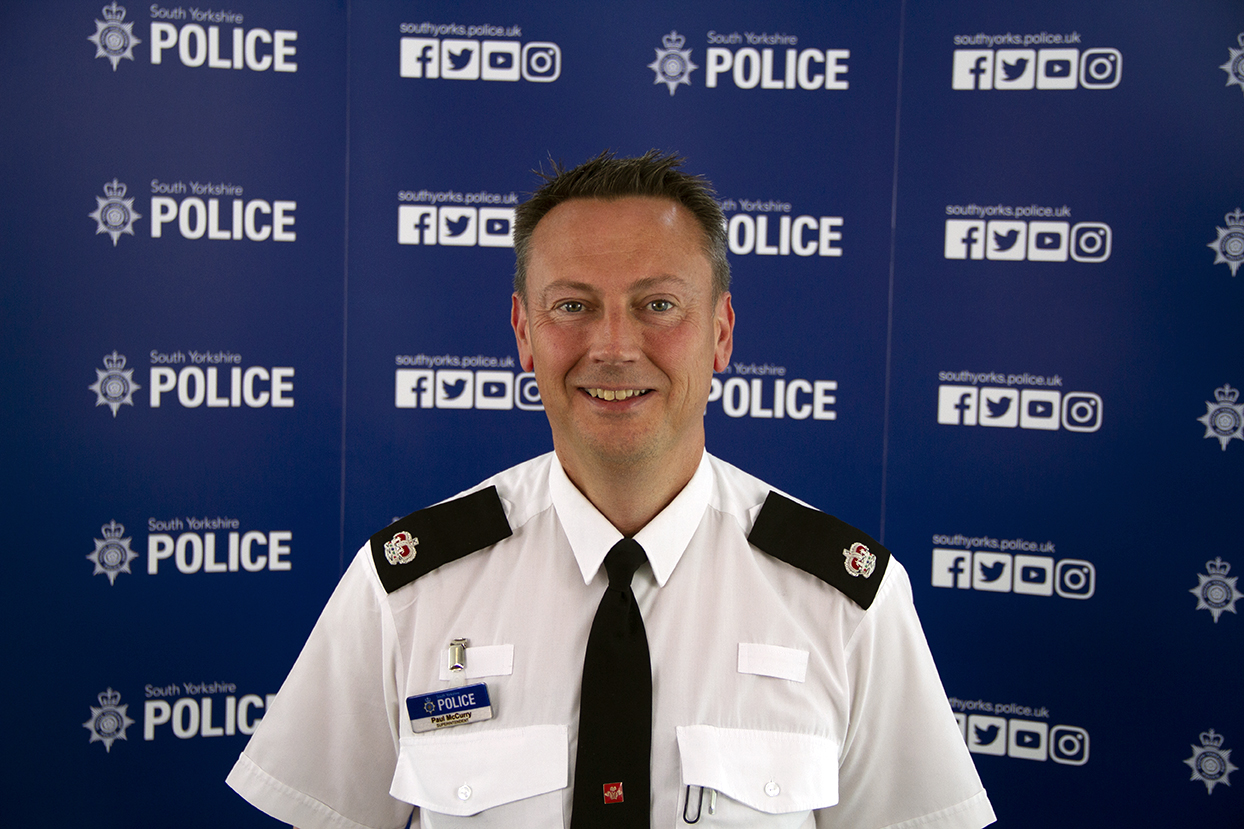 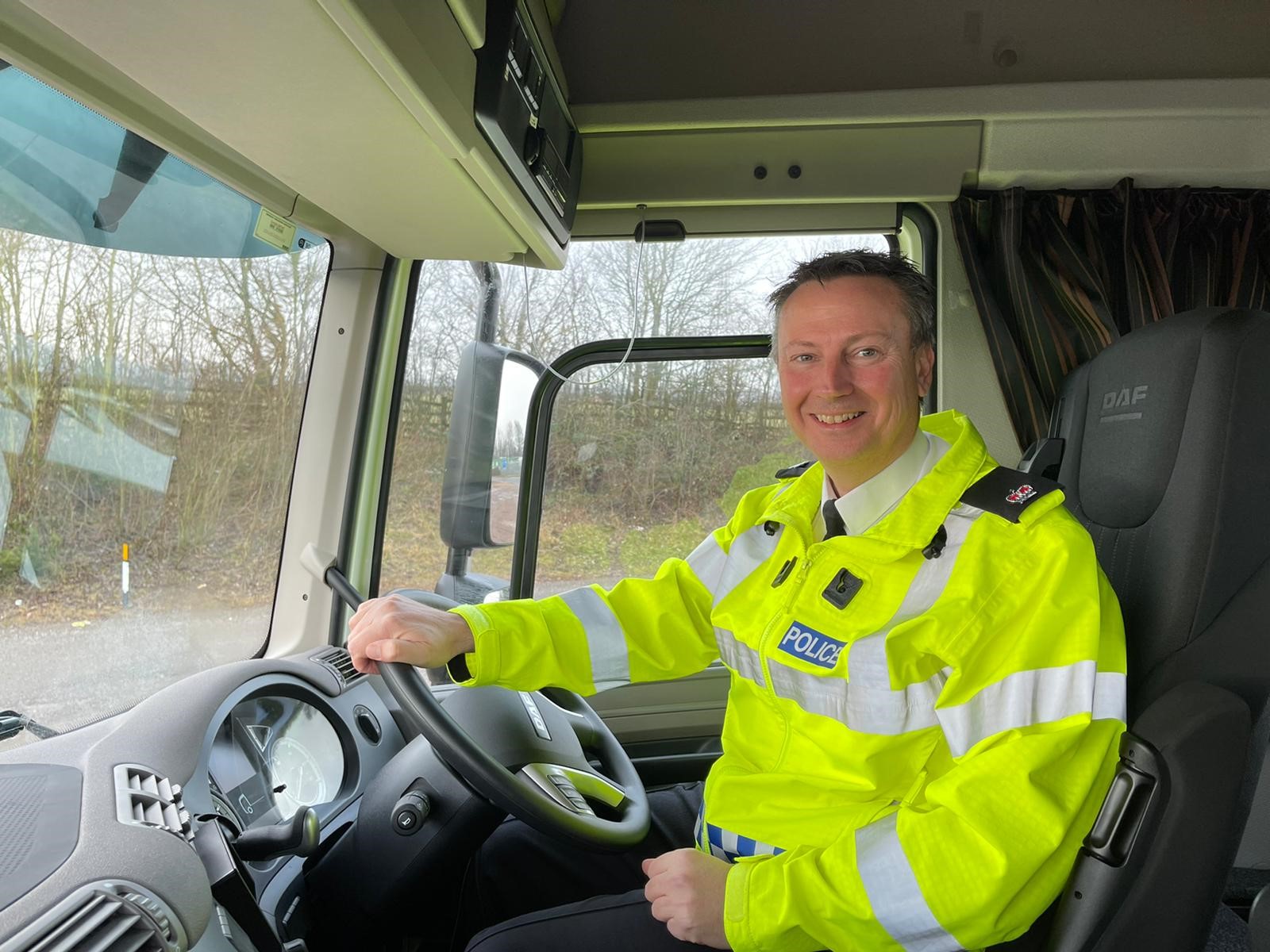 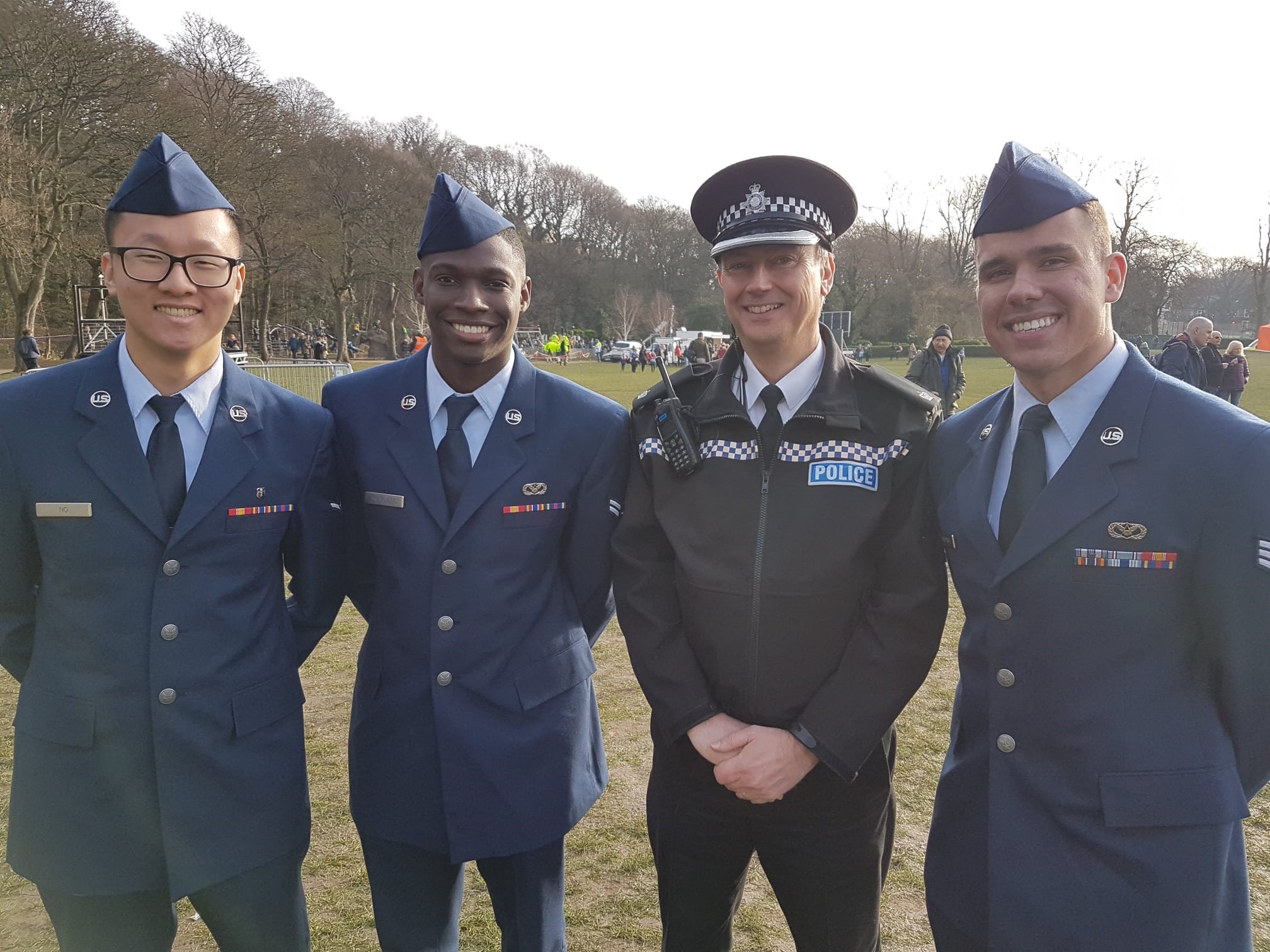 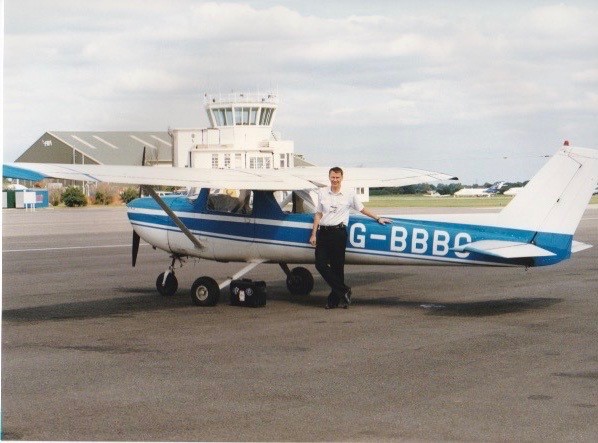 The plane Paul learned to fly in back in 1996. Photo: Paul McCurry 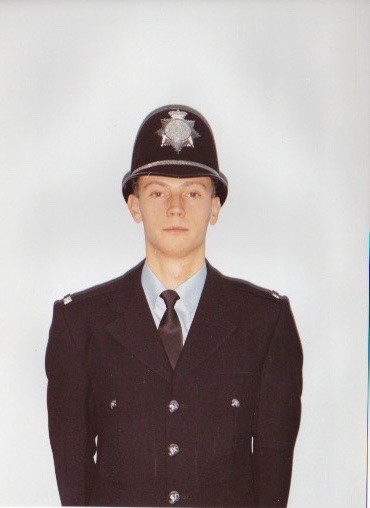 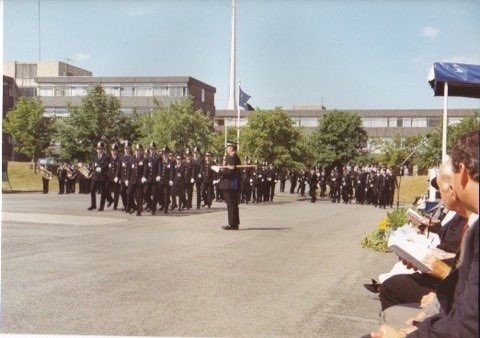