South Yorkshire Police and its road safety partners have been ‘encouraged’ and ‘pleased’ that the Christmas spirit shone through this year and the number of drivers testing positive for drink and drugs at the roadside throughout the festive period decreased.

But there is still room for improvement, with the number of drivers still testing positive following a road traffic collision ‘clearly of concern’.

The annual Christmas Drink and Drug Driving Campaign, in conjunction with our colleagues in the South Yorkshire Safer Roads Partnership (SYSRP), ran between 1 December 2021 and 1 January of this year.

As with the 2020 campaign, the ongoing Covid-19 pandemic and subsequent government restrictions had an effect on the results obtained – for example, there were still fewer drivers using the roads daily when compared to pre-pandemic levels as many people continue to work from home.

South Yorkshire Police’s Roads Policing Group (RPG) Sergeant Mark Bradey, who was involved in many of the roadside stop sites throughout this year’s campaign, said: “The percentage of positive breath tests has seen a marked drop, albeit the 14.6% testing positive following collisions is clearly of concern.”

While the number of positive drug wipes was down on the national average of 73.6% last year, provided by the National Police Chief’s Council, this still equates to a third of all drivers swiped for drugs on our roads testing positive.

As usual, the SYP drink and drug driving public survey was held at the same time to gauge public opinion. In total, 1,818 people took part, with some answering more questions than others. It was clear they wanted our officers’ nets cast far and wide to catch offenders. Some 1,432 (79% of 1,810) wanted all drivers targeted as opposed to specific age groups, with 1,327 (73% of 1,810) wanting round-the-clock stop sites.

And public opinion on the offence was also clear to see with 1,737 people (96% of 1,806 people) stating they would be happy to call either SYP directly or Crimestoppers with information on people they suspected to be driving under the influence of drink or drugs.

RPG Inspector Jason Booth said: “This annual campaign is critical in highlighting the dangers of drink driving and how prevalent it can still be on our region’s roads.

“While we are pleased to see the number of positive tests decreasing, the fact that even one takes place is too many. A drink driving incident so often ends in heartache and despair for one or more families, and we cannot rest on our laurels until these figures are driven right down.

“And we won’t. Our officers both in the Operational Support Unit and across the force will continue to pro-actively crack down on this until no more lives are altered through injury or cut short through tragedy on South Yorkshire’s roads.

“The results of our public survey showed that 79% (1,431 of 1,818 responders) of the public wanted us to carry out even more drink driving enforcement. We agree, and will continue to do all we can to combat this senseless and dangerous offence.”

The partnership work with SYSRP saw the use of traditional and social media for both paid-for and organic content to promote the anti-drink and drug drive messages of the campaign. These were seen more than 2.2 million times in December.

A quiz was also posted out for drivers to take part in quizzing them on the figures from last year’s campaign, as well as testing their knowledge on the laws surrounding drink driving. It was also ‘pleasing’ that many seemed to agree that the safest limit of alcohol to be consumed before driving was zero. Of the 1,808 who took the quiz, 1,635 (90%) agreed with this.

Joanne Wehrle, manager of SYSRP, said: “The lower percentage of people returning positive breath tests is encouraging to see and hopefully shows a shift in attitude toward recognising the dangers of driving under the influence of any amount of alcohol.

“Throughout December, we supported the police enforcement activity with our #NoneForTheRoad campaign, which was seen more than 2.2 million times across traditional media and digital media platforms as well as on adverts on the back of buses and digital screens.

“It is pleasing to see from the results of the public survey that 90% of respondents agree that the safest drinking limit when driving is to have no alcohol at all.

“We will continue to work with partners to share our educational campaigns in the hope they influence road user behaviour and encourage people to make responsible decisions just like the majority of people who do not drink or take drugs and drive.

“Only then will we be able to prevent the unnecessary pain and suffering caused by road traffic collisions.” 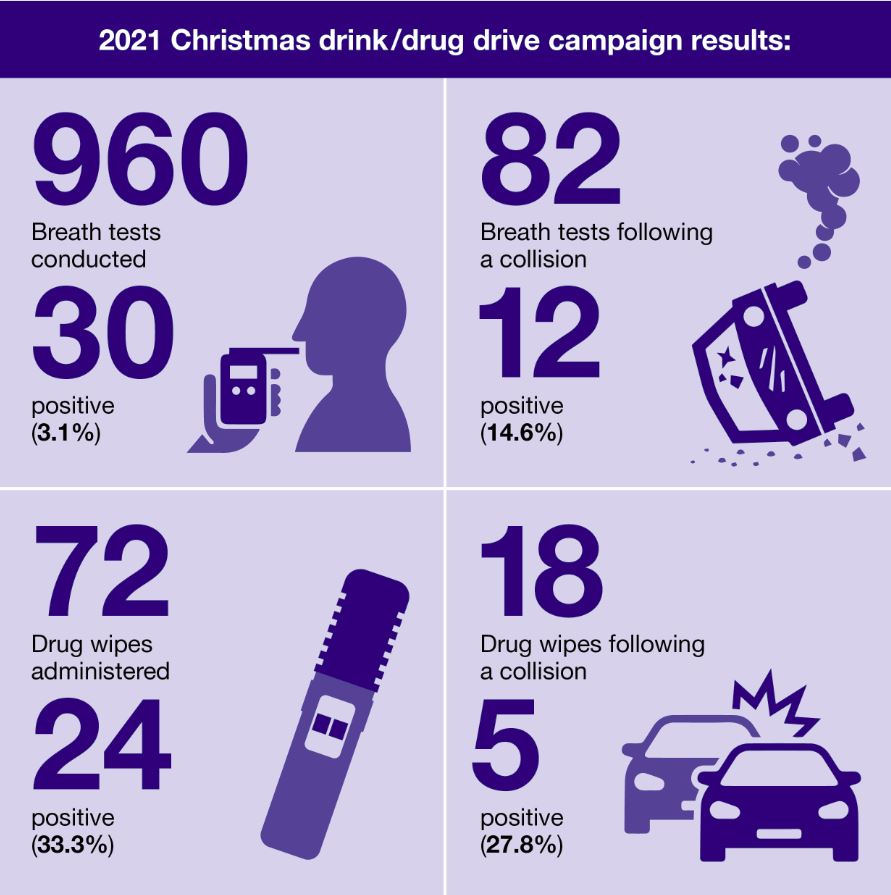