Police in Sheffield have released CCTV images of a man they would like to speak to after a woman was followed in the city centre.

On 11 March at around 11.30am, it is reported that a man followed the victim as she walked along The Moor, repeatedly asking for her phone number and making comments of a sexual nature.

Police now want to speak to the man in the CCTV images as they believe he may hold information that could help them in their enquiries. 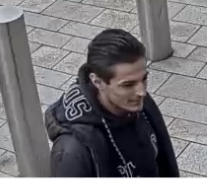