What is Use of Force?

The law allows the police to use reasonable force when necessary in order to carry out their role of law enforcement.

While we always look to utilise other operational means where we can, Use of Force remains an important tactic for our officers when dealing with more difficult suspects.

In England and Wales the use of (reasonable) force is provided to police and any other person under Section 3 of the Criminal Law Act 1967, which states "a person may use such force as is reasonable in the circumstances in the prevention of crime, or in effecting or assisting in the lawful arrest of offenders or suspected offenders or of persons unlawfully at large".

Persons serving with the police may use such force as is reasonable in the circumstances for the purpose of:

Why do we have Use of Force?

Ensuring police legitimacy in the eyes of the communities we serve is important in maintaining and building public confidence in the police.

Several strategic themes within policing play an important role in building legitimacy, one of which is the police use of force. Her Majesty's Inspectorate of Constabulary and Fire & Rescue Services (HMICFRS) recognise the importance of police legitimacy as a central aspect of the national assessment framework, in order to ensure: 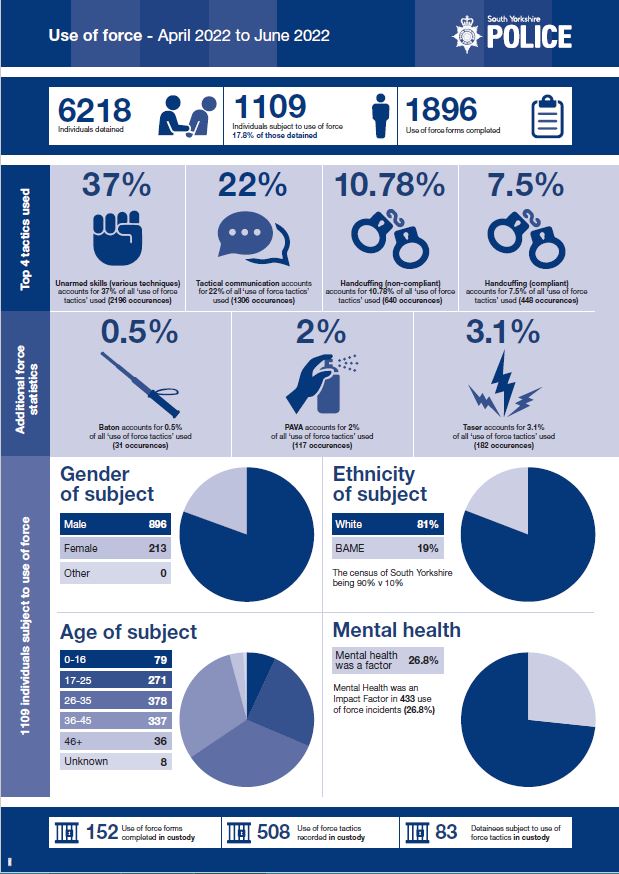 What does Use of Force cover?

According to the government, a use of force incident is defined as a situation in which a police officer uses any of the following force tactics on a single individual:

This includes distraction strikes with hands and feet and pressure point and joint locks to help restrain individuals.

Use of other equipment:

As part of our Use of Force policy within the force, we wish to remain as transparent as possible regarding how our officers deploy Use of Force tactics while dealing with difficult situations.

This year, SYP opened up a new scrutiny panel to help us improve and shape our Use of Force powers, and asked members of the public to get involved.

Panel members look through examples of incidents which included a Use of Force tactic being implemented, and why and how these powers were used.

To find out more and enquire about joining, email Inspector Louise Lambert with your contact details at louise.lambert@southyorks.pnn.police.uk

Archived Use of Force quarterly statistics

No Items to display